Spice Up Your Life: Thai Chillies

The chili (also known as chile pepper or chilli pepper) is the fruit of plants from Capsicum, which are members of the nightshade family, Solanaceae. The term in British English and in Australia, New Zealand, India, Malaysia and other Asian countries is just chilli without “pepper”.

The substances that give chili peppers their intensity/heat when ingested or applied topically are capsaicin and several related chemicals, collectively called capsaicinoids.

Chili peppers have been a part of the human diet in the Americas since at least 7500 BC. It is believed that the spread of chili peppers to Asia was thanks to Portuguese traders (Lisbon was a common port of call for Spanish ships sailing to and from the Americas) who, aware of its trade value, would have likely promoted its commerce in the Asian spice trade routes then dominated by Portuguese and Arab traders.

Today chillies are an integral part of the Asian diet. Thai food is known for its balance of three to four fundamental taste senses in each dish or the overall meal: sour, sweet, salty, and bitter.

Five main chilies are generally used as ingredients in Thai food. One chili is very small (about 1.25 centimetres (0.49 in)) and is known as the hottest chili: phrik khi nu suan (“garden mouse-dropping chili”). The slightly larger chili phrik khi nu (“mouse-dropping chili”) is the next spiciest. The green or red phrik chi fa (“sky pointing chili”) is slightly less spicy than the smaller chilies. The very large phrik yuak, which is pale green in color, is the least spicy and used more as a vegetable. Lastly, the dried chilies: phrik haeng are spicier than the two largest chilies and dried to the sun until they are a dark red colour. 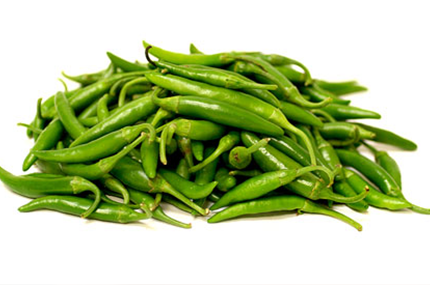 Chilies are incorporated into many Thai dishes. The Thais welcomed the chilli pepper to their cuisine with much enthusiasm, probably because they were already accustomed to eating spicy foods with ingredients like garlic, galangal (a type of ginger), and especially black pepper.

Although red chilies are a main ingredient in Thai cuisine, Thai chefs also use green and yellow chilies, which is why we have the three famous colours of Thai curry: green curry, red curry and yellow curry. Som Tam is also a famous and much loved Thai dish and is a green papaya salad which traditionally has a chopped fresh hot Thai chili, pounded in a mortar. We know of some died hard chili fans who have up to 8 chilis in their salad. Nam phrik is a traditional Thai sauce prepared with chopped fresh or dry chilies in fish sauce and lime juice. This tastes just great when drizzled over fried rice.

Red chilies contain large amounts of vitamin C and small amounts of carotene (provitamin A). In addition, peppers are a good source of most B vitamins, and vitamin B6 in particular. They are very high in potassium, magnesium, and iron.

Are you a chili fan? How hot can you take your food?