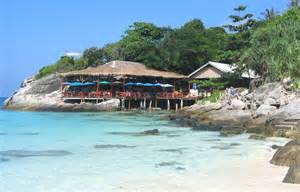 Southern Thai food tends to be much hotter than Thai food from other regions of Thailand and being heavily influenced by flavours and spices used in Indonesia and Malaysia, it is known for its sharp and intense taste.

Probably the most famous dish is geang – spiced soup or curry. You may also see it written as kaeng. The dish varies from being very watery, to rich, to creamy to dry – there are many different varieties. We recommend that you try geang liang, geang tai pla (femented fish curry is probably the region’s speciality dish), and geang garee. 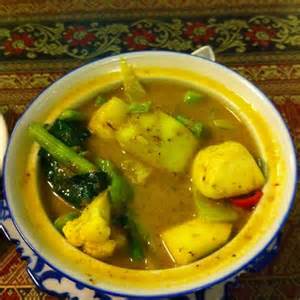 Another popular dish is khao yam which is rice mixed with ingredients like bamboo shoots, kaffir lime leaves, crushed nuts, some coconut, lemongrass, dried shrimp and sliced green beans, together with whatever other fresh ingredients the chef has in his kitchen.

Bitterness is another common flavour in the south – an ingredient which is often used in such dishes is sataw which is a green pod which, when peeled, reveals green berries. It is often fried with fresh shrimp, chilies and plenty of shrimp paste – perhaps to kill their distinct smell! Nevertheless, you’ll be reminded you ingested sataw when you use the toilet. Like asparagus, your urine will bear the odor after.

Satay is a very common street food in Bangkok, and also originates from the South. The peanut sauce is usually served with skewers of chicken or pork and is a great snack to eat on the run. If you have the time to sit down and enjoy the dish, it will usually be served with a small bowl of chillies and pickled cucumber.

Med riang is similar to a bean sprout but much larger in size and is dark green in colour. The outer skin is removed must be removed before eating. It can be cooked with vegetables and meat or pickled for eating with geang, chili sauce or lon (ground meat or fish in chili sauce).

Look niang is a round berry encased in a hard and dark green skin – again, the outer skin should be removed before it is eaten. Whether the inner layer is removed is a matter for individual taste. Fresh niang can be eaten raw or with chili sauce but ripe niang tastes better when it has been boiled and mixed with coconut flakes and sugar and it is usually served as a dessert.

And of course, its proximity to the sea on the Malaysian Peninsula, means that the seafood here is some of the best that you will have the pleasure of sampling in Thailand – our mouth just waters at the very thought! 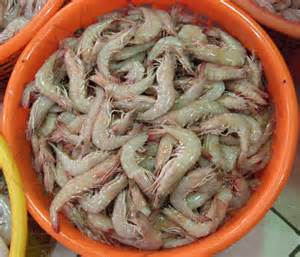 That is a brief introduction to some or the more popular dishes from the South. If you are in Bangkok and do not have the time to travel to the South, then we recommend that you give Phuket Town which is located just before Soi 8 on Sukhumvit Soi 55 (Thong Lo BTS exit 3) a try – it specialises in tasty dishes from the South.

Are you a fan of Southern Thai dishes? Have you tried any of these dishes? Which one do you like the sound of?