Beer is a popular drink of choice, here in Thailand. Whether it’s because of the refreshing feeling during the hot weather or the way that it pairs so well with many local foods and snacks, Thai beer is a great choice! In Thailand, you can also get foreign beers like Heineken, Corona, Hoegarden, Carlsberg etc. but Thai beers are inexpensive compared to any other beer brands and they taste pretty good too!

Beer was originally introduced to Thailand by European visitors but the beer brewing  industry was started here in 1933 by 57 year old Phya Bhirom Bhakdi or Boon Rawd. So since 1933 Thais have been brewing their own! Today’s Singha (pronounced ‘sing’) which is the oldest and best-know lager, is produced by Boon Rawd Brewery. 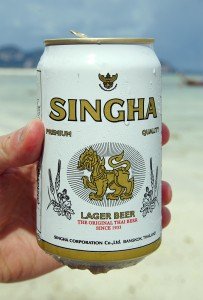 Thai local beers are typically a bit stronger (around 5-6% ABV*). Singha Corporation is the market leader with about 72 percent share of the beer market and Singha beer is usually slightly higher priced than some others, and as such it is called as rich man’s beer. Original Thai beer. it’s a 100% barley malt beer. It has a rich body with strong flavor and tastes like malty sweetness.  There is also a Singha Light with only 3.5% ABV.

Singha’s largest competitor is Chang, which means Elephant in Thai language. Chang has been produced since 1995. Sometimes it’s called poor man’s beer because of it’s cheaper price. It’s stronger than Singha as it contains 6.4% ABV. Chang is full flavored lager and some westerners are die-hard Chang lovers. They say it has a stronger flavor with cleaner and smoother taste. 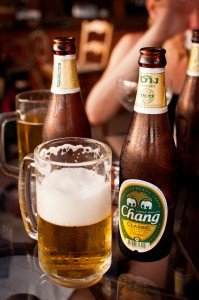 Leo is another popular Thai beer. It is slightly lower in cost and also made by Boon Rawd. It is a full – flavored lager beer. Leo is the cheaper alternative of Singha, and it’s generously described as “non-premium”. It contains 5% ABV. Leo is easily available in Bangkok. 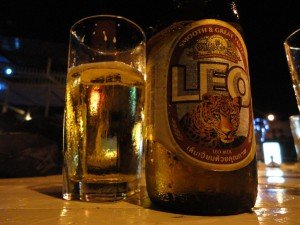 Phuket beer was founded in 2002 and it is brewed with premium German hops and Thai jasmine rice. These ingredients are added during the brewing process to enhance the beer’s smoothness and aroma. The name Phuket is derived from the island of Phuket, associating itself with the lifestyle of this leading beach resort. This island lager beer is smooth and raw in taste. Available in 640ml, 330 ml bottle and 330 ml can with 5% ABV. 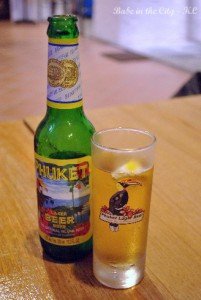 Drink Thai, save money and be happy: There’s nothing better than an ice cold pitcher of Thai beer on a hot Bangkok day (or night)!