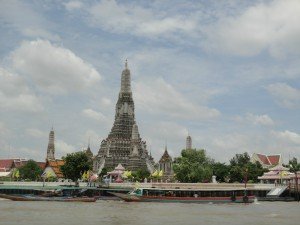 Wat Arun is one of the most famous and most loved temples in Bangkok, and with good reason. It is certainly one of our favourites in the city.

The full name of the temple is Wat Arun Ratchawararam Ratchawaramahawihan named after the Hindu god Aruna.

Built in the Khmer style, Wat Arun features a central prang (spire) with four large prangs. The height of the main prang is reported by different sources as between 66.8 m (219 ft) and 86 m (282 ft).

The central prang symbolises Mount Meru of the Hindu cosmology. The surrounding prangs are devoted to the wind god, Phra Phai. The prangs are decorated with demons, bells and porcelain flowers. The temple evokes peace, and as you wander around there is something so soothing about the bells ringing gently in the wind.

It is easy to see why the temple’s nickname is the Teacup Temple – look closely at the central prang and you will see it is covered in millions of china pieces. The mosaics are truly beautiful. 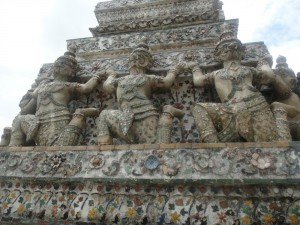 Guarding the temple are impressive figures which many refer to as being the guardians of Wat Arun. They are in fact supposed to represent demons ( also known as yaksha) and they are from the Ramakien. The white figure is named Sahassa Deja and the green one is known as Thotsakan.

There are three levels of the central prang that you can climb – be warned the climb up (or rather back down) to and from level three is not for the faint hearted thanks to the steepness of the steps, but make the climb and you will be rewarded with magnificent views of the Chao Phraya River and Bangkok.  The reason for the steepness of the steps is down to the Buddhist/Hindu symbolism that is incorporated into the temple’s architecture. Climbing the steep stairs is meant to represent the challenge that Buddhists face reaching nirvana. 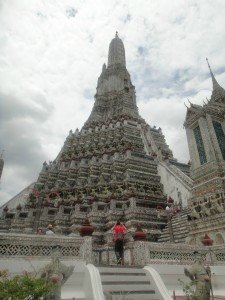 Wat Arun features in one of Thailand’s most colourful festivals, the Royal Kathin and His Royal Majesty, the King travels along the Chao Phraya River as part of the Thai royal barge procession to present new robes to the monks after their three-month lent period.

Wat Arun is easy enough to reach from central Bangkok and is actually the perfect attraction to head to following our tour! Head towards Sathorn pier (Saphan Taksin BTS) and catch either the express (15 THB per journey regardless of length) or the tourist boat (40 THB per journey regardless of length or 150 THB for a day pass). Disembark the boat at Pier Tha Thien (N8) and then catch the ferry across the Chao Phraya River for 3 THB.

Insider tip: If you head here mid to late afternoon head to the Arun Residence across the river afterwards and enjoy a cocktail on the deck watching Wat Arun light up as dusk falls. Although the name means the rising sun, and indeed it is beautiful watching the first light of the morning reflects off the surface of the temple with pearly iridescence, we feel it is better seen during sunset.

Have you visited Wat Arun? What did you think? Where is your favourite temple in Bangkok?