The Vegetarian Festival is a bright and lively celebration held over a nine-day period in September/October. The Chinese community consider that abstaining from during the ninth lunar month of the Chinese calendar will be rewarded with good health and serenity.

As is typical with many Chinese festivals, the origin of the Vegetarian Festival is not associated with food. Rather, it is commonly believed that the festival was brought to Phuket by a Chinese opera group who fell ill with malaria while on the island. They began a strict vegetarian diet and prayed to the Nine Emperor Gods for purification of the mind and body. And sure enough, the opera group made a complete recovery, and therein started one of Thailand’s most popular annual festivals. 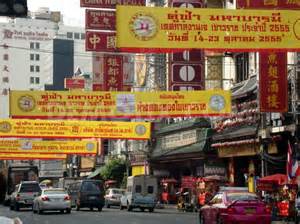 The 2014 Vegetarian Festival in Thailand is held between 24 September – 3 October, although many people will start a day in advance to “cleanse their body”. As well as eating vegan/vegetarian, many will also avoid vegetables with a strong smell such as onions and garlic together with herbs and spices such as coriander.

Due to its origins, the biggest celebrations in Thailand are found in Phuket. Festivities in Phuket go well beyond avoiding meat. Participants also take part in fire walking, body piercing and other acts of self-mortification acting as mediums of the gods. It is quite something to see. Men and women even go as far as to puncture their faces with items such as knives, believing that the Chinese gods will protect them from harm, and only minimal blood or scarring will occur from such mutilation acts. 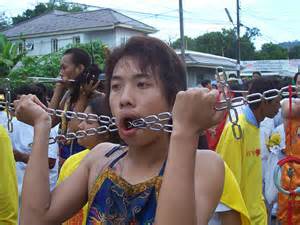 If you find yourself in Bangkok, we recommend that you head to Chinatown (Hua Lamphong MRT or Ratchawong Pier/Pier No 5 if using the Chao Phraya Express).

You may notice when in supermarkets such as Villa or Big C or convenience stores like Family Mart or 7-11 that some foods are marked with red and yellow stickers – that is to show they are suitable for people taking part in the festival. Interestingly, you will often note that fruit, vegetables and bottles of water also bear such stickers – just to address any concerns or doubts people may have as to their suitability! 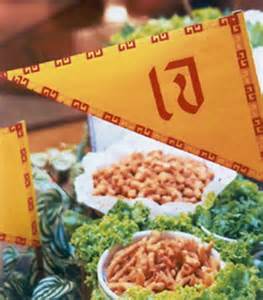 Equally, street food vendors will also decorate their stalls with flags if they are taking part. The vegetarian dishes are not easily distinguished from regular dishes – soybean and protein substitute products are used to replace meat in standard Thai fare and look and taste uncannily like meat. Dishes such as ‘vegan pork’ or ‘vegan duck’ are likely to be made from tofu or mushroom or even gluten dough. Other popular dishes include Pad tau-hu priew waan (sweet and sour fried tofu), Pad pak ruam (mixed fried vegetables such as baby corn, carrot and snow peas), Po pia thod (fried spring rolls) and Pak thod (deep fried vegetables in batter).

If you wish to participate in the festival and are unsure whether a dish is vegetarian or not, ask the vendor “gin jay?”

Will you be taking part in the Vegetarian festival? Have you done so before?