DO NOT WASTE YOUR FOOD! 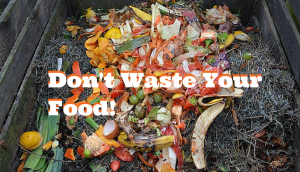 Can we imagine how many foods are being wasted every year throughout the world? According to a recent report by UNEP and the World Resources Institute (WRI), about one-third of all food produced worldwide, worth around US$1 trillion, gets lost or wasted in food production and consumption systems. The amount of food lost or wasted every year is equivalent to more than half of the world’s annual cereals crop (2.3 billion tonnes in 2009/2010).Wow, that’s huge! When we are too full to finish the remaining scraps on our plate, we hardly think about the significance of our action that what will happen if the scrap foods are thrown into the garbage? Let’s think from environmentalism. Food waste leads to wasteful use of chemicals such as fertilizers and pesticides. More fuel is used in transportation and more rotting food creates more ‘Methane’ (CH3), which is one of the most harmful greenhouse gases responsible for the climate change. Methane is 23 times more potent than CO2 and the increasing concentration of carbon in the atmosphere add to the cost. These issues are contributing to global warming and climate change.

Recently, France has banned indiscriminate waste of food, which is a milestone step from the developed world. The United States can be considered to this step as well requiring supermarkets to come to an end from destroying unsold food and instead donating it to food bank charities or farms where it can be used as animal feed or compost.

In France, it is estimated that the average amount of food wasted per person, per year is between 44-66 pounds (20-30 kg). In the USA, the problem is worse. The average American wastes significantly more, 235 pounds (106.59 kg) per year according to the US Food & Agriculture Organization (FAO). Organic waste is the second highest component of landfills in the USA, which are the largest source of methane emissions. 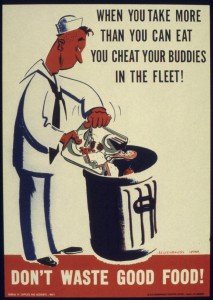 THINK smartly before EATING. Be aware of food choice and food waste

EAT the right amount of food

SAVE food, money and the environment