It’s Chinese New Year – what a great time to enjoy the tastes of sites of Bangkok’s Chinatown!

Located in the Yaowaraj district of Bangkok, Chinatown is full of Chinese traditional shops, foods, and flavor. Chinese New Year is one of the most vibrant events in Thailand. It’s widely celebrated all over the country.  The New Year, also known as the Spring Festival, is marked by the lunisolar Chinese calendar, so the date changes from year to year.The festivities usually start the day before the New Year and continue until the Lantern Festival, on the 15th day. 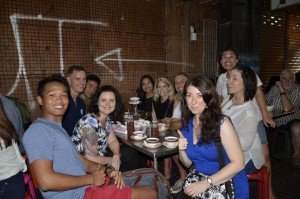 It was believed that a mythical beast called Nian on the night of New Year’s Eve, would come to town and ravage the people and their homes. Residents put food on their doorsteps to pacify the beast and set off firecrackers. As well, they decorated their homes with all things red, as it was believed the Nian was afraid of the color red.  You will find Bangkok’s Chinatown decked out in red more than usual during this season.

Each Chinese New Year is characterized by one of 12 animals that appear in the Chinese zodiac. The Chinese zodiac is divided into 12 blocks (or houses) just like its western counterpart, but with the major difference being that each house has a time-length of one year instead of one month.This year it is the Year of the Monkey, the ninth animal of the cycle. 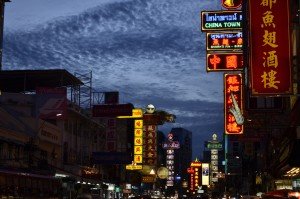 Of course, the Chinatown experienced along Yaoworaj road is a fun place full of vendors and temples, on any night. It’s a popular tourist attraction and a food haven for all generations of people. During the daytime too, it’s not less-busy as hordes of shoppers descend upon this 1-km strip and adjacent Charoenkrung Road to get a day’s worth of staple, trade gold, or pay a visit to one of the Chinese temples. During the Chinese New Year period, Yaowaraj becomes the center of celebrations in Bangkok, with locals flocking to enjoy Chinese delicacies and atmosphere in even greater numbers than seen on it’s usually busy weekend nights.