3 of our Favourite Foodie Floating Markets

Travellers dreaming of Bangkok often have a visit to one of the city’s many floating markets high on their list of must-dos. Yet floating markets in and around the Thai capital offer more than the obvious photo opportunity of the canal-based traffic jams of Thailand’s past. Many are also prime eating territory, serving up the opportunity to taste your way around some delicious examples of Thailand’s world famous cuisine. Here are some of our favorite food-obsessed floating markets in and within easy reach of Bangkok. 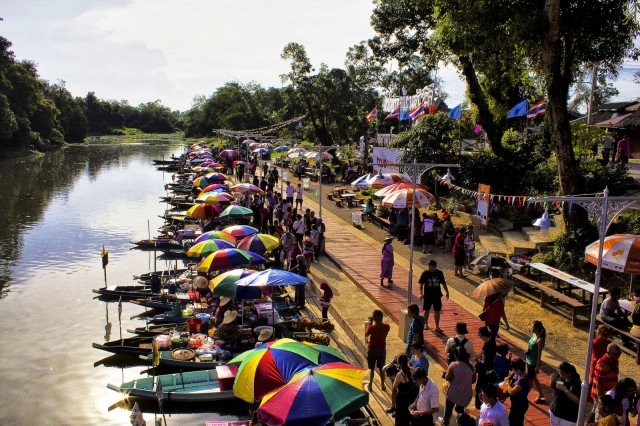 Off the radar of most tourists, Khlong Lat Mayom is a local floating market that packs out on the weekend with clued-up Thais in search of great food. Khlong Lat Mayom is located in the far reaches of the capital’s Thonburi district, and yet within easy reach of downtown Bangkok by either taxi or public transport. The market is split into two separate zones, both offering fantastic eating opportunities – dishes from across Thailand’s four main regions, with everything from Chiang Mai khao soi curried noodles to khao mok gai chicken biryani that hails from the south.

Khlong Lat Mayom understandably gets very busy around lunchtime, so come a little earlier for fewer crowds to battle against as you peruse the rows and rows of vendors serving up authentic Thai dishes, and to allow you to grab a vantage point alongside the canal from which to tuck in. While all of the market action itself is on land, boat trips start from just 20 baht and take in the local neighborhood, with stops at temples and orchid farms. Food aside, there are homewares and clothing on sale as well as vintage-style postcards and other souvenirs, and even inexpensive Thai massage.

The easiest way to get to Khlong Lat Mayom floating market from central Bangkok is to take a taxi, but it’s also possible to make the journey by public transport. Take bus number 511 from outside Central World and alight at Taling Chan floating market (the conductor will let you know when you’ve arrived). After checking out the lower-key floating market here, jump on board a small red converted songthaew truck that acts as a shared taxi – you’re looking for one with a white sign above the driver’s cab displaying the destination (only in Thai). If unsure, check with either the driver or passengers that it’s going to Talat Nam Khlong Lat Mayom; a nod or shake of the head will confirm. The same trucks run in the opposite direction for the journey home; alternatively, a fair number of taxis pass the market and will take you back to your hotel. 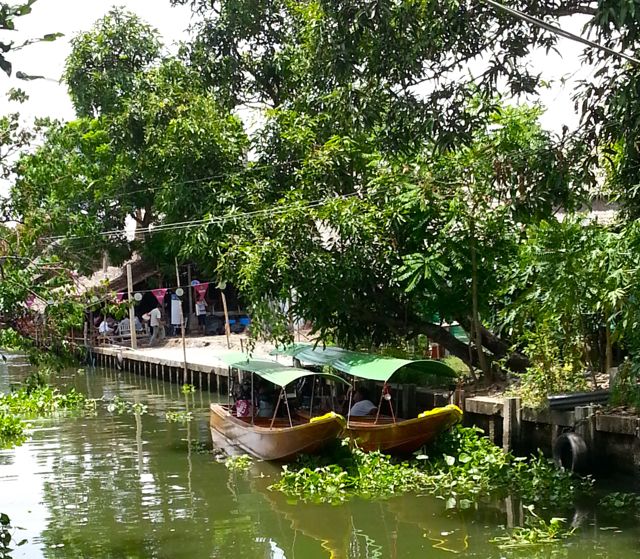 Just 20 minutes from the Skytrain’s Sukhumvit line, this is perhaps the easiest floating market to get to from downtown Bangkok. Bang Nampheung also has perhaps the most blissful setting of them all. You’ll find it on the Chao Phraya river’s artificial island of Bang Krachao – known colloquially as ‘Bangkok’s green lung’ for the fact that it has avoided the skyscrapers to be seen just across the water, and is a popular fresh-air escape from the city’s traffic. As well as prepared dishes that make it easy to pull together an impressive lunch spread, there’s a wide choice of fresh foods that are less commonly found elsewhere – think health-boosting gac fruit (with a flavor that’s something of a cross between papaya, orange and tomato) and dried butterfly pea flowers, which are deliciously refreshing steeped as a tisane and turn a gorgeous shade of purple when given a squeeze of lime.

It’s possible to combine a leisurely wander of the market – filling your stomach with the plentiful array of floating market staples like noodle soups, freshly grilled seafood, and spicy papaya salads from northeastern Thailand – with a cycle along the elevated paths that take you around the island and over verdant mangrove swamps. Bicycles are available for rental at the pier when you arrive on Bang Krachao, or you could make an overnight trip of it and stay at the stunning riverside Bangkok Tree House eco-friendly resort, which offers free use of its bicycles for exploring the peninsular.

To get to Bang Nampheung floating market, alight from the Skytrain at Bang Na station. Hail a 20-baht motorbike taxi or a regular metered taxi for the short hop to Sanphawut pier (asking for the pier, or ‘tha-rua’, will get you there), then hop on the 4-baht cross-river ferry to Bang Krachao island. From here, waiting motorbike taxis will whisk you straight to the market; the ride costs 20 baht, and there’s no need to even say where you want to go, as everyone’s heading the same way! 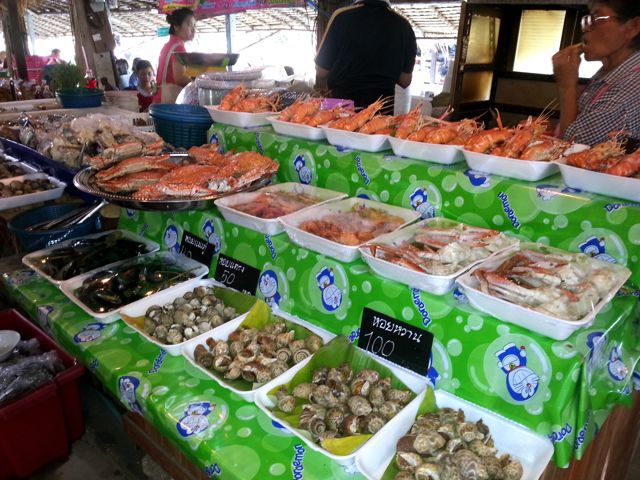 More well known than the others, and so deservedly popular and relatively busy of a weekend afternoon, Amphawa is still predominantly favored by Thais looking for an escape from Bangkok. A retro theme rules the day at Amphawa, and here it’s all about pulling up a pew alongside the canal and tucking into freshly grilled prawns, whole fish and other seafood that’s both delicious and reasonably priced.

Other options include miniature bowls of noodle soup served up by vendors on passing longtail boats – once you’ve whetted your appetite, the challenge quickly becomes how many of these taster dishes you can manage to put away! Wash it all down with a couple of local beers as the sun goes down over Amphawa, and then join one of the popular night-time boat tours along the canal to spot fireflies in the mangroves that overhang the banks.

Passenger vans travel directly to Amphawa floating market from several locations beneath Victory Monument Skytrain station; the journey takes around an hour and costs in the region of 90 baht. 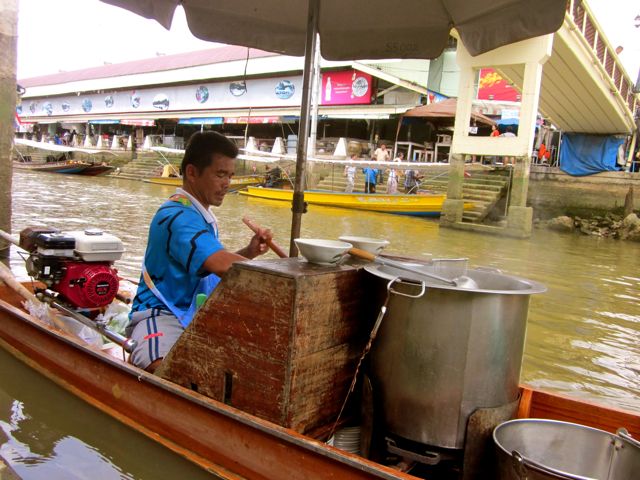 Which is your favorite foodie Bangkok floating market? Let us know in the comments!